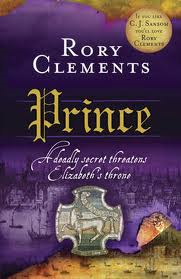 Prince by Rory Clements is an Witness Impulse publication, an imprint of Harper Collins. This book was published originally in 2011. I received a copy of this book from the publisher and Edelweiss in exchange for an honest review.
This the third installment in the John Shakespeare historical mystery series.
Set in the 1500's, during the reign of Queen Elizabeth, the political atmosphere is volatile. The Spaniards are lurking, there is a backlash against "strangers" (foreigners, mainly Dutch) and some rather disturbing rumors regarding Mary, Queen of Scots.
For John, a man's murder begins his investigation that connects loads of powder kegs moving into the area, a royal secret, and an unfathomable conspiracy.

This is the third book in the series, but the first one for me. If you are like me and have not read the first two, I don't think it will hinder your enjoyment of this one. The main character, John Shakespeare, is Will's brother. He finds himself tangled up the a web of lies, prejudices, power struggles, and on a personal front, John gets sucker punched in the worst possible way, leaving the reader feeling like they were kicked in the stomach.
It will be interesting to see how this case effects John in the future. He learns shocking secrets, and his life had forever been changed the events that take place in the this installment.
This is a very dark and atmospheric historical novel, very rich in details and the dialogue is understandable, yet authentic.
There are several stories going on a once, but they all get brought together in the end.
I think it would be hard to write a historical mystery, especially set back this far in time. So many things hinged on rumor or word of mouth. Cause and time of death were difficult to determine. The laws were so different back then. It would also be hard to maintain this level of detail all throughout the book and not slip in a modern phrase or technique in there without thinking. The author did a great job of putting the reader into the past and letting us experience it through his eyes.
Overall this one gets an A.