ME & MOE BY MICHAELA RENEE JOHNSON 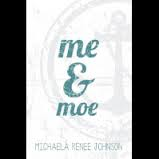 Me & Moe by Michaela Renee Johnson is a self published novel released in 2013. I received a copy of this book from the author in exchange for an honest review.

Alex was orphaned as child when her parents were killed in a car accident. Her grandparents raised her in San Francisco. Grandma "Moe" and Grandpa are still spry and involved in Alex's life since Alex still lives at home.
Alex is employed by a local radio station. This is a just a stepping stone for what Alex hopes will be a long serious journalism career. She wants to be in war zones and doing the really gritty stuff. But, fate has other plans. The radio station merges with a larger one based in New York and now play top forty music.
To stir up publicity, Alex has to change time slots and sign up with a dating service. She must go out on dates and then tell about them the next day on the air.
For Alex, a woman that has never dated much and didn't really mind being single, this is mortifying. But, when she is promised an opportunity in New York if she will follow through with the publicity stunt, she reluctantly agrees.
Hilarity ensues when Alex goes out on one terrible date after another. Moe gets involved and Alex's career and personal life becomes a nightmare of confusion.

This story was insanely funny, heartwarming, and touching. Alex learns from her experience on the radio show that she has some big decisions to make. She learns a lot about her life and her past and that gives her the strength to decide on her future.
I loved this book. It was well written, carefully plotted to keep you guessing what will happen next. I usually read several books at once, but once I started on this one I couldn't put it down.
I recommend this book to those who enjoy chick lit, contemporary fiction, and romance.
This one gets one the rare five star ratings. A+