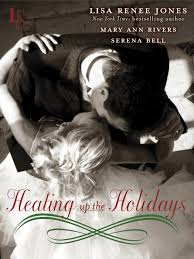 Heating up the Holidays 3 story bundle is a Loveswept publication released in October 2013.
I received a copy of this book from the publisher and Netgalley in exchange for an honest review.

Well, it's that time of year when we start breaking out the holiday stories. Many of the Christmas themed novels we read border on the syrupy sweet. There is no better time of year for heartwarming tales of romance. But...... Sometimes the holidays need a little spice. If spice is what you are in the mood for, then you should like this one. Three contemporary holiday themed romances.

The first story in the book is "Play with Me" by Lisa Renee Jones.
Kali has career and family issues bad enough to leave Texas for Vegas. Her new job working for the CEO of a large casino operation has her working up close and personal with Damion Ward, a man known for chewing people up and spitting them out. But when Kali shows no fear towards him, he is instantly at attention. But, trouble lurks when a security breach is discovered.

The second story is "Snowfall" by Mary Ann Rivers.
This is the story of Jenny, a brainy young woman that never wanted anything but to be a microbiologist. No problems with achieving that goal, but Jenny has been diagnosed with an eye disease that will cause her to eventually lose her sight.
Meanwhile, Jenny has begun chatting with the person that lived in her apartment before she did. The catch is that they have never met. Casual conversations soon turn into hot internet sex.
But, Jenny is also trying to prepare herself for the day when she will no longer be able to see. She begins seeing a therapist that helps her with exercises so she will be able to function as normally as possible. But, there is also an attraction between herself and her therapist. This is a Christmas themed romance, that's hot by also sweet.

The Third story is "After Midnight" by Serena Bell. This is story of Miles, a man going through an incredibly difficult phase in his life. He is attending a New Years Eve party with his best friend Owen, who insisted he attend. Miles meets Nora at the party and the two of them connect, but Miles is in no place at that time to really act on his attraction, although he wants to. But, before he can grab a New Years kiss from her, the two of them are separated and never even knew each other's names. Will they ever be able to find each other again?
This one was also sweet and spicy. A great story to start off the New Year with.

All three stories were good in this bundle. The second and third were the best, with the second story being my favorite.
Overall this one gets an A.