VALLEY OF VICE BY STEVE GARCIA 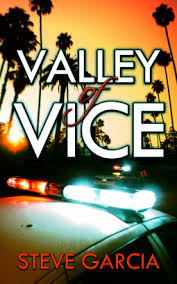 Valley of Vice by Steve Garcia
My rating: 3 of 5 stars

Valley of Vice by Steve Garcia is an August 2013 release and is published by Diversion Books.

Salvador Reyes and his partner Philippa Wallace are attending a welcome back party for their fallen comrade when they get a call about a possible arson. They find a body on the constructions site. It turns out the dead guy was the one that had arrested for shooting their fellow law officer. He had been released and now he was dead.
Somehow, all of this ties into a bidding war between two construction companies, blackmail and drug dealing, and somewhere in the mix are some dirty cops.

To make matters more difficult, Philippa's husband is with FID. This time he may be looking into Philippa's squad and that makes things a little awkward.
Then a prominent city council member commits suicide, taking the investigation in all sorts of directions.

This mystery, police procedural, was interesting. I think for me, what it was lacking was more character development. I'm really not sure if this is part of series, but I didn't find any other books by this author on Amazon. I did get the feeling that the reader was supposed to know some background on these characters prior to reading this novel. There were too many characters as well, in my opinion. At times I had to stop and remind myself where a particular character came in at and what they had to do with the plot. The other thing was that the dialogue was dull and flat. There was some banter between characters from time to time, but it really wasn't all that interesting or funny. The plot was well thought out and I was curious about how everything was going to turn out. So, if you like police procedural mysteries that do not dwell on the character's personal relationships and friendships a great deal, a book that sticks to the mystery and pretty much keeps things real, then this one is for you. It wasn't a bad effort, but it needed a little spice. Some car chases, or more internal drama between Phil and her husband or something. It was just a little dry. Overall this one is a C.