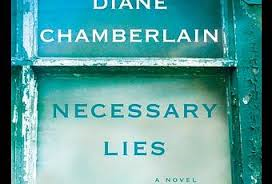 Necessary Lies by Diane Chamberlain
My rating: 5 of 5 stars

Jane is a young, idealistic, woman, newly married to a doctor, but going against the convention of the day by maintaining employment. But, she doesn't have just any job, she is a social worker in the field.
Set in south, during the fifties, Jane wants to be more than a just a mother and a member of the Junior League. She really wants to help people. Her husband, however, is dead set against it. He initially humors her, but is very embarrassed that his wife is working outside the home and not only that, she rubs elbows with those living in the worst poverty areas and may even have to go inside "colored" people's homes.

One of the families Jane is responsible for is the Hart family. The grandmother, suffering with diabetes and arthritis, is raising her two teenage granddaughters. Mary Ella, the oldest became pregnant at age fourteen. Now, they have another mouth to feed. So, to prevent any further pregnancies, Mary was sterilized and told she had to have an appendectomy.
Ivy, only fifteen, is also considered "slow", and she has epilepsy. Her grandmother and the social workers fear Ivy may also become pregnant and are pushing paperwork through at lightning speed to have her sterilized as well. Ivy also would have no clue about what the surgery really was.

Once Jane becomes more involved with the family and bonds with Ivy, she begins to think the forced sterilization is not right for her. Jane hates the lies these girls have been told. They should at least be told the truth. But, to rob a young girl of the chance to marry and have a family of her own without her knowledge was more than Jane could bear.

Jane finds herself fighting her social circle, the one her husband desperately wishes she would become a part of, and of course her selfish husband who hates her having a job and belittles her regularly and complains continuously about it. She does make one friend though, and is inspired by her to continue with her job.
Jane also must fight the social services employees. Her boss and supervisors are furious with her because she is dragging her heels on Ivy's paperwork and she has become too emotionally involved with the family.

I wish I could say that all the things that took place in the book was a figment of the author's imagination, but we know that these sterilizations did actually take place. Initially, these were done to the very poor white women, and even some men, but eventually, the majority of these sterilizations were done to poor black women. To some of these women, it was a blessing, but mostly these sterilizations were not something these women chose to do, or were correctly informed about.
The story of Ivy was something that could really have happened. Of course, you can't help but think of Nazi Germany when you read this book. It's really hard to digest that people really thought this way.
Not only was the story of Ivy and the Hart family realistic, but so was the attitude of most men about their wives working outside the home and having their own careers. The man felt his wife's whole world should evolve around him!!

So, this is the set up. Jane is faced with heart and gut wrenching choices and decisions. While, this is not a mystery or suspense novel, I found myself on the edge of my seat. There are so many sad and tragic stories in this book, all due to extreme poverty, ignorance, prejudices, racism, and a society that condoned these actions.
It takes a lot of courage to stand up and fight an entire system without any support from family, friends, or the community as a whole. But, that is just what Jane did.
Her tenacity and internal strength to make the right decisions impacted so many lives for generations to come.
Jane's life didn't really turn out like she had envisioned it, but she was given a life far more rewarding than if she had simply given in and given up.
This is a very emotional read. There is sympathy, anger, fear, and sadness, but there is also a very uplifting and inspirational conclusion that will pull on the heart strings.
I highly recommend this book for all fiction/literature readers. This would also appeal to historical fiction fan. This is a resounding A++

View all my reviews
Posted by gpangel at 9:17 AM