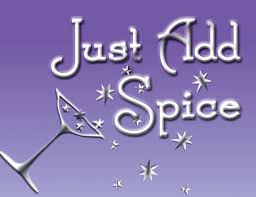 Just add Spice by Carol E. Wyer is a 2013 publication. I received a copy of this book from Netgalley and the publisher in exchange for an honest review.

Dawn's husband Jim, was forced into retirement. Their only son is beginning his life on his own and may even be about to pop the question to his girlfriend.
The long, comfortable relationship Dawn and Jim had has become increasingly strained. Jim is miserable now that he no longer has a job.
Dawn on the other hand is beginning to enjoy a new time in her life when she is able to explore her love of writing and has decided to get her body in shape.
A character in the novel Dawn is writing, Cinnamon, is always in Dawn's ear. As Dawn takes writing and exercise classes, deals with her marriage and stepping out of her comfortable life, Cinnamon sort of cheers her on or plays devil's advocate.

The story alternates between Dawn's real life world and the fictional world of Cinnamon. Of course there just so happens to be a similarities between Dawn's life and Cinnamon's. Will reality and fantasy collide?

This is a really unique story about a woman in her forties, going through some difficult changes. Her life had been at least contented until Jim lost his job. She raised her son, took care of her home, enjoyed her own company and looked after her dad.
But, now her husband is an old grouch, and her son doesn't need her anymore. She doesn't have any close friends to talk to. So, she escapes into the novel she is writing. Taking her classes introduces her to a new people and encourages her to continue with her hope of finishing her novel. She even attracts the attention of a younger man, who becomes a real temptation to Dawn, especially given the circumstances of her home life.

I think the story is one many women can relate to. Having your husband under your feet after retirement can be a shock. Men in particular seem to have trouble adjusting to those life changes, but when it's forced on you, it's really hard to take. Dawn finds that she and her husband don't really have that much in common anymore and now the cracks are starting to show.
After her son has moved into adulthood, Dawn is forced to examine herself and isn't really all that happy with what she sees. Instead of moping and falling into a depression, she sets out to discover who she is now and where her future will lie. Some of those things are decided for her, but Dawn proves to be resilient. We know that both Dawn and Cinnamon are fighters and will both will survive, and maybe they can still have a much deserved HEA. Overall I think this in a B+
Posted by gpangel at 6:49 AM