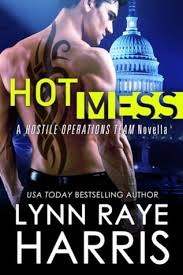 Hot Mess by Lynn Raye Harris
My rating: 4 of 5 stars

Hot Mess by Lynn Raye Harris is a September 2013 release. I was provided a copy of this book by Victory Editing and Netgalley in exchange for an honest review.

Georgeanne is Rick's younger sister, and Rick is Sam's best friend. Rick's family took Sam under their wing when his own parents were less than a loving family unit. Sam has put them up on a pedestal. When Georgie was a kid, she bugged Sam and Rick all the time. But, when Sam comes home on leave from the military, he finds Georgie is a sexy eighteen year old and still has a massive crush on him. But, when you are talking about your best friend's little sister, well, there are just some lines you don't cross.
Twelve years later, Georgie is teaching military personnel. She has a failed marriage and now leads a quiet life. But, when one of her students fails to attend class, after being so diligent in the past, she becomes concerned.
Rick is worried about Georgie and sends Sam to check up on her. While she has the chance, she ask Sam if would check on her student. Perhaps he had been deployed suddenly? Sam agreed to do her this favor, and uncovers a hornets nest.
Sam is now a member of one of the most secretive military operations groups- The "Hostile Operations Team" otherwise known as HOT. Someone now believes Georgie knows something she doesn't. It's Sam's job to protect her.
Well, this book is HOT for sure!!
Sam feels like he is doing the honorable thing by keeping Georgie at arms length. Georgie is insulted and hurt. She's been less than confident since her marriage crumbled and she's a little sensitive.
But, the two of them wind up having to spend a great deal of time together. Georgie uses this opportunity to try and convince Sam that a relationship between them could work.
But, Sam is one stubborn guy.

Sam is one of those rare guys that has set of principles he lives by and sticks to them. This makes him an excellent addition to the HOT. But, these principles don't always work out when it comes to love. Sometimes you have to bend the rules a little.
The chemistry between Georgie and Sam sizzles, and mean SIZZLES!. Physically, these two have no problems, but emotionally, they struggle.
Can the two very different people, from very different walks of life, manage what would be a very unconventional life together?

This the second book in the HOT series and is actually a novella. A quick, sexy read, I absolutely recommend- especially to those of you that enjoy hot romantic suspense, and military heroes.. and who doesn't?
Overall this one gets an A.

View all my reviews
Posted by gpangel at 6:05 AM