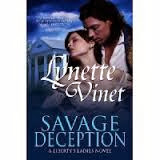 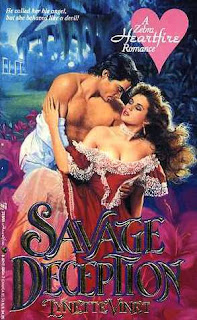 Savage Deception by Lynette Vinet
My rating: 4 of 5 stars

Savage Deception by Lynette Vinet was originally published by Zebra and is now being re-released by Steel Magnolia Press in digital format.
Diana is encouraged to marry Kingsley by her sister, Anne. They are of the same station in life and Kingsley shows himself as a good man, but when Diana sees Tanner, a common laborer and the bastard half brother of her fiancé, she feels things she never thought were possible.
When Tanner and Diana find themselves alone, Tanner can not control his passion. But, the two are discovered in a compromising position by none other that Kingsley.

Tanner is punished and Diana is still set to marry Kingsley, so Tanner leaves the estate.
But, Diana's marriage is horrible. Kingsley abuses her and punishes her at every opportunity. When Diana's father in law discovers the truth, he banishes Kingsley from his home. But, Kingsley goes to war and dies a hero.

Now, Diana’s sister and brother in law are in trouble, and when she is told of a man that could help free her brother in law, the last person on earth she imagined seeing again was Tanner.

Tanner has never forgotten Diana. He has tried every way he knew how. Now, no longer a poor laborer, but a man of vast wealth and connections, he feels he can win Diana’s love.
Naturally, things do not start off so well for the couple. Not only are there several misunderstandings but both of them are keeping very dangerous secrets.
After Diana and Tanner marry, a marriage in name only for Diana, Tanner learns of his half brother’s cruelty to Diana and promises to show her how true love can be. Just when Diana begins to relax with Tanner and realize he really loves her and that their marriage could work, their secrets are exposed and a wedge is driven between them that they may never recover from.

This was an excellent historical romance. There were some difficult passages in the beginning, but it doesn’t last for long and then the story takes a very different turn. Watching Tanner win Diana over is sighing worthy.
The war and the intrigue that Tanner and Diana are involved in, makes the book suspenseful and toward the end when a huge twist comes into play, you will find you are on pins and needles.
Tanner is just dreamy. Wow! What a guy. Diana wasn’t one of those whining females either. She started out being a bit fragile which was perfectly understandable, but she really grows as a person and with Tanner’s love and patience becomes confident.
This book was so entertaining and how I wish, wish, wish they still wrote historical romances like this one.
I am so happy that Steel Magnolia Press is releasing many of Lynette’s backlist in digital format.


View all my reviews
Posted by gpangel at 7:22 AM