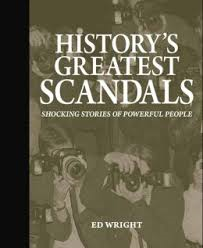 My rating: 3 of 5 stars
History's Greatest Scandals: Shocking Stories of Powerful People by Ed Wright is a Thunder Bay publication and was releases in June 2013. A copy of this book was provided to me by the publisher/author and Netgalley in exchange for an honest review. This is a fairly short non-fiction book listing an array of well known and perhaps a few lesser known scandals involving politicians and other world leaders and a few Hollywood scandals. There were only a handful that I was not overly familiar with. The most interesting one for me was The Star Spangled Killer. The older ones that regarded people from other countries were also not as well known, to me at least. The author included former President Clinton's sexual escapades, the Watergate Scandal, the PTL Jim Bakker scandal, and the Roman Polanski scandal. Everyone loves a scandal. Come on admit it, you do. For me personally, I grew up hearing about Watergate and half of the other scandals that the media beat to death. So, about half of the featured stories were just too familiar to me. I knew these stories backwards and forwards. But, there were a few I had forgotten about, like Imelda Marcos and her collection of shoes. Other stories I was less knowledgeable about. It still amazes me the lengths people will go to for power, money, to avoid jail or hide their sexuality. This is an interesting book and will be fun to remind yourself of when the media couldn't get enough of Jessica Hahn and how she took advantage of her fifteen minutes, or to shake your head at the depravity of people that lived way back in the 16 and 1800's.  I hesitate to refer to this book as entertainment, but it was, and of course it is all true and a piece of history, like it or not. I give this one a C+
<a href="http://www.goodreads.com/review/list/5210022-julie">View all my reviews</a>