Crazy Rich: Power, Scandal, and Tragedy Inside the Johnson & Johnson Dynasty by Jerry Oppenheimer
My rating: 3 of 5 stars

Crazy Rich: Power, Scandal, and Tragedy Inside the Johnson & Johnson Dynasty by Jerry Oppenheimer is a Macmillian/ St. Martin's Press publication. This book was released in August 2013. 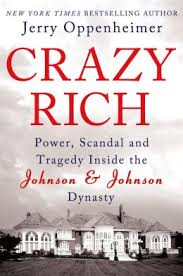 Thanks to the publisher and Netgalley for the DRC of this book.

As the title of the book indicates the focus of this book is on the various members of the Johnson & Johnson family and the scandals and tragedies that have beset them.

We were given a brief history of how the company got it's start, then we moved on to the marriages, children, and various accidents, deaths, drug additions, health issues, affairs, trials, and other family dramas and traumas.

Before I read this book, I had little knowledge of the history of the family. The only thing I was vaguely aware of was that Woody Johnson owned the New York Jets and that he had a daughter that died young.

I did find the history interesting up to a point, but I really struggled to get through this one.
As the rap song says: "Mo Money, Mo Problems" , I would have to agree. This family's wealth was astounding. Not one of them seemed capable of maintaining a stable relationship. There were epic court battles over wills, and paternity suits, as well as numerous marriages and divorces.
Compared to the Kennedy's in terms of tragedies, the Johnson family had more than it's share.

There were some interesting tidbits in the book, but it got a bit dull when it seemed that history just seemed to repeat itself.
I don't understand this lifestyle and can not imagine the type of wealth involved. By the same token, I don't think the Johnson's could in any way relate to most of us. Casey Johnson took a trip to a supermarket once. It amazed her. She had never been inside a grocery store before because everything was delivered to them.
Woody thought that his money could by a cure for his daughter's diabetes. He wanted her well, right now, as though she had a common cold or something.
While moderately interesting, it didn't hold my attention all the way through. It was actually hard to get to the end due to it's being redundant.
I also finished it with a bit of a depressed feeling. There was no happiness it seems for any of these people.
While we often dream of winning the big lotto and becoming fabulously wealthy, you might change your mind after reading this book. Just like the saying goes- Money won't buy happiness.

Overall this one is a C.

View all my reviews
Posted by gpangel at 9:29 AM