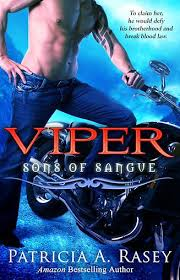 My rating: 4 of 5 stars
Viper is a July 2013 release, written by Patricia Rasey and published by eXcessia. I received a DRC of this book by the publisher and Netgalley in exchange for an honest review. As a teenager, Cara and her good friend Suzi, are out clubbing. When Cara steps into the ladies room, she is shocked to find a couple having sex. This may have been nothing more than a really embarrassing situation, except when the man turned to look at Cara, he had blood dripping from fangs! Cara fled Pleasant and never told a soul what she had witnessed that night. Now ten years later, Cara is back in Pleasant working as a detective. Her latest case involves the death of several women, all of which had the blood drained from their bodies. Who do you think is Cara's number one suspect? Right, you guessed it- Kane Tepes. Yes, the same Tepes from Vlad the Impaler, also known as Dracula. It seems Kane and his twin brother, Kaleb are direct descendants. Kane is the president and Kaleb the vice president of a motorcycle club, The Sons of Sangue. They are all too aware of the killings in their town and are also out to put a stop to it. When Cara and Kane come face to face again after ten years, it's intense. Kane should have erased her memory ten years ago, but for some reason he didn't, thus breaking the rule of the club. But, he  is certain Cara won't tell anyone. He is also certain that Cara could be the next victim. When he insist on being Cara's bodyguard, the tension between them boils over- literally. HOT! However, Kane's brother and the other club members are not too happy about it. Not only that, but it appears an old enemy may be out for revenge against Kane, opening up deep, painful wounds for Kane. It's been a long time since a new vampire type paranormal romance has grabbed my attention. This one was a real treat. Hot alpha males in a motorcycle club, a serial killer, steamy sex, and romance with heart and emotion. I must also say, this seems sort of like an ode to the FX show "Sons of Anarchy". I LOVE that show! The author did a great job of pacing the story that kept you engaged from start to finish. The end was suspenseful and tense, but of course you know we must have out HEA. But, watch out Kaleb- your day is coming. Hopefully, in the next book of the series. This one gets a good solid A.
<a href="http://www.goodreads.com/review/list/5210022-julie">View all my reviews</a>