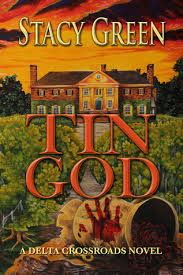 My rating: 4 of 5 stars
Tin God by Stacy Green is an April 2013 publication. This is the first in the Delta Crossroads mystery series. Set in hot, sultry, Mississippi in the small town of Roselea, Jaymee Ballard finds her boss Rebecca, murdered. Nick lives in Jackson. When he reads about Rebecca's murder he sees an stunning resemblance to his wife, Lana. Lana was murdered four years ago. A note to Nick suggesting the two murders are connected sends Nick back to Roselea. With information Jaymee may have about Rebecca's murder, Nick and Jaymee begin connecting the dots that lead to Jaymee's all consuming search for her daughter, Sarah. When Jaymee was a teenager, she was seduced, then when she got pregnant, she was manipulated into giving the child up for adoption. Jaymee had begun to believe the adoption was illegal. When Jaymee had confided this to Lana, Lana being a social worker started looking into the adoption. What she found out may have gotten her murdered. When Nick learns of the connection between Rebecca, Jaymee, and Lana, he begins to unravel a black market baby ring, more victims of illegal adoptions, old family secrets, and a cover up that involves some of the town's most respected citizens. Jaymee is a girl trying to better herself, but before she can think of her own future, she needs to find her daughter. Nick is still dealing with the guilt of Lana's murder. His own ambitions left Lana alone and if he had been around when he should have, she might still be alive. When the two of them team up to get to the bottom of the murders and the illegal adoptions, they find they might have a chance for love and redemption. This was a very absorbing mystery. The author did an excellent job of putting you right there with the characters, as though you were living events right along with them. You can feel the humidity of the Delta. You can envision the  small town politics and good ole boy mentality that still held true. There are shocking revelations, and twist you won't see coming. There was a feeling of closure for Nick and Jaymee, but it was also bittersweet. We hope their future will be better than their past, and I think it will be. Overall a solid A.
<a href="http://www.goodreads.com/review/list/5210022-julie">View all my reviews</a>