THE SUMMER OF DEAD TOYS BY ANTONIO HILL 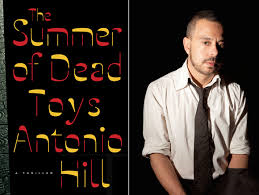 4 out of 5 stars
The Summer of Dead Toys is a Random House publication released in June 2013. We are introduced to Inspector Hector Salgado during a very difficult period. He is on leave while he seeks therapy and things cool down a bit from Hector's breakdown. He nearly beat a man to death after discovering the atrocities the man had committed. Somehow, Hector was hanging on to his job. Hector is also dealing with his ex-wife that left him for another woman and the distance between himself and his son. When a young man, Marc, takes a tumble from a window, initially it's thought to be a suicide or a tragic accident. But, the boy's mother is having serious doubts and so Hector is unofficially looking into the situation. Upon closer inspection, Hector finds that things concerning Marc on the night in question do not add up. Marc's two closest friends spent time with him that evening. Both of them appear to be withholding information. Hector is partnered with a young girl that he becomes fond of. She is also going through some life changes and the two are able to commiserate. Hector has a few really good friends that are helping him stay on track and from being accused of things he didn't do. The sad story that unfolds regarding Marc's family life, and the odd pair of friends and their troubled lives is shocking. Marc's mother was not around when he was growing up and his father remarried. The second wife was unable to conceive and they adopted a little girl. This caused Marc to further distance himself from people. But, there is something that happened to Marc while on a trip to Dublin. Something that caused him to wish to reconnect with his mother, something that his friends say made him return home a different person. After examining Marc's blog it is discovered that he met a girl in Dublin and the name Iris continues to come up. The problem though is that Iris is dead. She died at the age of twelve in a bizarre drowning accident. Did Marc suddenly remember something about that long ago summer? What did his two friends know about it and did one of them shove Marc out the window? Also, sort of in the background the case that has Hector is hot water, is still ongoing. Hector and his ex-wife and son are being threatened. But, when things seem to be finally getting back to normal, the unimaginable happens. Set is Barcelona, Spain during the sweltering summer, this novel is a great start to what could become a good, long running crime series. I never guessed who the killer was. I also never thought about the other issues Hector was having until the very end, when we thought everything was going to all be alright. Then it wasn't. So, we are left with a little bit of a cliffhanger. This is a situation though that could take several more novels to finally resolve itself. We will just have to wait to see. Hector is hard to read. I didn't know really how he felt about some people. He has had a childhood that he worked to overcome, but came back to bite him at the worst possible moment, and we get the feeling he still wishes things could work out with his ex-wife.  But, at times Hector shows a fondness for his friends but, it's pretty low key. He does make a good listener, though. He is a quiet, thinking man most of the time. A very interesting new character. I'm hoping the next installment comes out soon. I'm excited about this series. Highly recommended for all mystery lovers.
<a href="http://www.goodreads.com/review/list/5210022-julie">View all my reviews</a>
Posted by gpangel at 6:29 AM