THE EDGE OF NORMAL BY CARLA NORTON 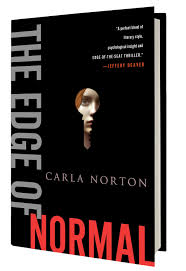 My rating:  4 of 5 stars
The Edge of Normal by Carla Norton is a Minotaur publication set for release in September of 2013. Thanks to the publisher and Netgalley for the DRC of this book. Reeve LaClaire is the survivor of kidnapping, rape, and torture. She was held captive for over 3 years and now a decade later, she is still unable to live a "normal" life. She is close to her father, but her sister has the 'shouldn't she be over it by now' attitude. Reeve also finds it difficult to be touched, to hold down a steady job, and to have friends, much less lovers. The media attention that has followed her since her abduction caused her change her name from Regina to Reeve. The nasty moniker "Edgy Reggie" as she was dubbed after she was found is blessedly a thing of the past.  Dr. Lerner is still her doctor after all this time. When another young girl is found after spending a significant time imprisoned, Dr. Lerner is consulted. However, Tilly Cavanaugh's parents are reluctant to bring him on board due to his being a man. They want to know if Reeve will come and visit Tilly and speak of her experiences with Dr. Lerner. Once Reeve agrees to see Tilly, a number of things begin to take shape. First of all there are two other missing girls. Tilly's kidnapper has been arrested, but there is no word from Tilly or the kidnapper- Randy Vanderholt about the other girls. Tilly's experiences are remarkably like Reeve's. The two girls bond uneasily at first, but eventually they are both able to open up about the horrors they both endured. Despite the arrest of Randy, things still don't seem to add up entirely. Tilly may have information she had been concealing for the protection not only of herself, but her family as well. But, once Reeve discovers Tilly's secret, she goes on a one woman mission to find the other girls and prevent more kidnappings. She is sure there is still at least one more predator out there and he may be a wolf in sheep's clothing. This book explores the difficult topic of surviving the experience of being held prisoner, being tortured, and raped repeatedly over a period of years. The  psychological damage that one would have to live with on a daily basis, and the inability of others to relate to being that type of victim. Families walking on eggshells, friends not knowing what to say or now to act around you, feeling distanced from the world as a whole. The physical and emotional scars that linger. The first part of the book deals with the aspect of Tilly's reliance on Reeve and her attempt to gain back some normalcy in her life. We also see law enforcement trying to gather as much information about the kidnapping and not really being all that sensitive to the victim or those trying to treat the girl. We are of course shown the media barrage that follows in the aftermath. Seeing your face of television, having the details of your experience splashed all over 200 cable channels, being analyzed and picked over. However, not all the members of the press were unfeeling. One member of the press was of great help in this case. The second part of the book deals with Tilly's startling revelation, Reeve being sworn to secrecy, and her own investigation. The heart pounding conclusion was incredibly intense.  The recent headlines regarding the Ariel Castro kidnappings has this subject fresh in our minds. But, this author has wrote true crime books about this subject a while back. She draws on her expertise to bring us a taut, emotional, and terrifying novel. Reeve, gets a new outlook on life after her experiences with Tilly and becomes a true hero. I would recommend this book to mystery/thriller readers. Be warned that the subject matter is emotional, but the author handled these subjects with delicacy and didn't put graphic descriptions in the book just for shock value. The author writes the story as though we are living events right along with the characters. This was very well written, suspenseful thriller - I thing it deserves an A.
<a href="http://www.goodreads.com/review/list/5210022-julie">View all my reviews</a>