THE AMERICAN HEIRESS BY DOROTHY EDEN 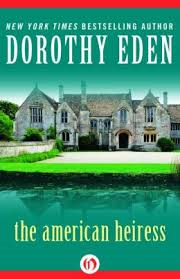 My rating: 5 of 5 stars
The American Heiress by Dorothy Eden was originally published in 1980. Open Road Media has released some of Dorothy Eden's best loved novels in digital format. This one was a July 2013 release. Clemency Jarvis is betrothed to Lord Hazzard, Hugo, and is preparing to travel to England for her wedding. Her ladies maid- Hetty, will be making the journey with her. Although warned that since the war has broken out it is unsafe to cross the Atlantic, Mrs. Jarvis insist the wedding take place before Hugo must go into combat. So, they board the fated Lusitania ship. Clemency was an American from New York whose family was quite wealthy. Her betrothal to Hugo was certainly not a love match. Clemency and her mother just want the title and Hugo is in financial straights and needs Clemency's money. Clemency is spoiled and without much depth of character. She is silly, vain and self absorbed. But Hugo seemed taken with her during their short introduction. Hetty Brown, has lived with Clemency since she was a child. She is a servant in the house, but Hetty is all too aware of her heritage. Just one look at her and one would guess Hetty is related to Clemency, since the two could easily pass as sisters. So, when the ship they are on is wrecked, Mrs. Jarvis had insisted the three of them load themselves down with the jewelry they had brought in hopes of salvaging something and making it to a life raft. However, the majority of people on board were dead. When Hetty regains consciousness, she is wearing a bracelet with Clemency's initials engraved on them, making people believe she was Clemency. Mrs. Jarvis has been identified as one of the dead, but Clemency was never found. The temptation to step into Clemency's shoes was too great for Hetty. Knowing who her father was, gives Hetty the rationalization that she is owed just as much as Clemency. So, once Hetty arrives in England, she finds it all too easy to step into Clemency's role. But, be careful what you wish for. Hugo only has a short leave before he must return to war. This leaves Hetty with her sister in law, her mother in law and a woman named Julia. Julia and Hugo had once been in love. Julia is stunned when Hugo choses money and the restoration of his estate over Julia and a love match. Hetty has been told that Julia will not be turned out of the house. So, Hetty must deal with suspicions that she is not who she claims to be, the devastating images of the shipwreck, the jealousy and all consuming determination of Julia to wreck her marriage, and being haunted by Clemency. To make matters worse, her brother in law has been sent home from the war and she finds the two of them have a great deal more in common that she and Hugo ever had. The backdrop of the war, and the horrific effect of surviving a shipwreck and trying to maintain a front under a cloud of suspicion, Hetty is constantly ill at ease. She doesn't know if Clemency will ever show up  or if someone from her past will recognize her or if one of the ladies in the house will set a clever trap for Hetty to fall into. The suspense is nearly unbearable as Hetty deals with several huge personal blows, and with her increasing feeling for her brother in law, and the constant worry that Hugo will be killed on the battlefield, and of course the ever present and increasingly vindictive, Julia. Dorothy Eden was a master story teller well ahead of her time. Her talent for building suspense and throwing shocking twist into a story made her a regular best seller. If you read mysteries and romantic suspense novels you can see Dorothy Eden's influence in many popular authors today. Dorothy also wrote in the very popular Gothic romance genre  in the 60's and 70's. I was so excited when I saw that Open Road Media was going to release a nice size backlist of Dorothy's work in digital format. It's a real shame that these books were only available through used bookstores and Ebay. It's not like you can walk into a Barnes & Noble and purchase one these books now. So, many readers have been missing out on some really good stories and influential writing.  Now everyone can re-read their favorites or be introduced to this most talented author. This story in particular stands the test of time. This one is historical, suspenseful, and romantic. A++