THE 7TH WOMAN BY FREDERIQUE MOLAY 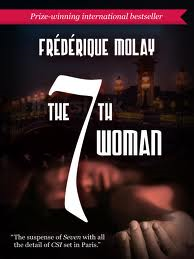 My rating: 4 of 5 stars
The 7th Woman by Frederique Molay is a Le French Book publication. Originally published in 2006, this book was made available in digital format and translated into the English language in 2012. The translator is Anne Trager. Set in France, Nico Sirsky is the thirty-eight year old chief of police. He is one of the youngest men to have this position. The job is taking a toll however, and he is the doctor's office having his stomach examined for possible ulcers. In the meantime, a serial killer begins his reign of terror. A young woman is murdered in a most gruesome fashion. It is discovered in the autopsy that she was one month pregnant. When a second girl is murdered the same way and she also is one month pregnant it becomes obvious the police force had a HUGE problem. The killer begins making it rather obvious that Nico is really his target and begins to mess with Nico's family, putting anyone that Nico cares about in danger. That includes the doctor he has fallen head over heels in love with. Nico must also deal with his son and his ex-wife's depression, all while trying to out wit this diabolical killer. This is a very graphic, even gory serial killer crime novel. It is certainly not for the faint of heart. The blurb compares the story to the movie "Seven"  and the forensic TV show CSI. I can see where someone might be reminded of the movie. The forensics were very interesting and added a scientific angle to the story. This is a very grim story, with very little comic relief. The only humor is in watching Nico behave like a teenager as he falls in love. Otherwise the book is none stop crime solving. You will find yourself suspecting everyone imaginable. I enjoyed this one. I like reading crime stories written by authors from other countries, set in a country or city that I have never been to. I enjoy seeing how the police force and crime units to things as opposed to the way thing are done here in America. If you like gritty, forensic, and dark crime mysteries this one is for you.<br /> This was a really good crime novel. I highly recommend it. Overall this one gets an A.
<a href="http://www.goodreads.com/review/list/5210022-julie">View all my reviews
A NOTE ABOUT THE AUTHOR:

Frederique Molay graduated from France's Science Pro- and began a career in politics and French administration. She worked as chief of staff for the Deputy Mayor of Saint-Germain-en- Laye.  Meanwhile she spent her nights pursing a passion for writing. The 7th Woman too France by storm.
Posted by gpangel at 7:27 AM