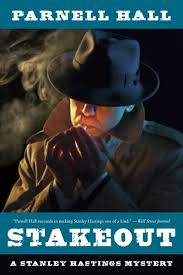 My rating: 4 of 5 stars
Stakeout by Parnell Hall is an Pegasus publication and was released in January 2013. This is a Stanley Hastings Mystery. Stanley feels like a real detective when he is hired by a woman to find out if her husband is having an affair. Stanley is staking out a motel where the man in question has gone. A woman never shows up, however. After waiting what felt like an inordinate amount of time, Stanley loses patience and goes to see what's going on. He finds the man has been murdered and almost immediately, the cops show up and arrest Stanley for murder. Stanley's lawyer, his wife, and a New York detective all get involved in the case as Stanley tries to find out who really killed the guy in the motel as well as another murder victim that could be related. Stanley's case turns out to be quite complicated. A mobster, his girlfriend and his wife, the woman that hired him and the manager of the motel all wind up being suspects. Stanley's lawyer is at his wits end as Stanley continues to get in his own way. Laugh out loud funny, this screwball mystery was an absolute delight. Stanley's conversations with his wife are classic, the descriptions of New York and New Jersey traffic had me bowled over in laughter. I highly recommend this mystery, and all the charming Stanley Hastings mysteries. I promise you will love these. Highly recommend!