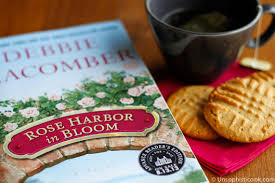 My rating: 5 of 5 stars
Rose Harbor in Bloom written by Debbie Macomber is a Ballantine publication was released in August of 2013. Set in Cedar Cove, Jo Marie has settled in to running the Inn at Rose Harbor. It's been a year since Jo Marie lost her husband ,Paul, when his helicopter crashed in Afghanistan. Although, he was presumed dead, his body was never found and Jo Marie held out hope that somehow, some way, Paul is still alive. In the meantime, Jo Marie has a house full of guest, a 50th wedding celebration and an open house to get ready for. Her handy man, Mark, was supposed to have the rose garden ready for the open house, but it became clear to Jo Marie that he wasn't going to make it in time. So, she starts work on it herself, only to have Mark get bent out of shape over it, which lead to an even sillier argument. Mark up and quit and now Jo Marie feels out of sorts about it. As her guest begin to arrive, Jo Marie welcomes Mary, a cancer patient. Mary has some things she needs to make peace with now that she is fighting for her life. One of those things is contacting her old love, George. The two of them parted ways eighteen years ago, but never stopped loving each other. Could they ever overcome the hurdles that kept them apart in the first place?  Kent and Julie are celebrating fifty years of wedded bliss. Their granddaughter has booked a party in their honor and the couple will renew their vows. (Awwhhh)  Annie is Kent and Julie's granddaughter. She recently broke off her engagement to Lenny after finding out he cheated on her a second time.  When she shows up at the Inn and finds out that her grandparents neighbor, when she was a teenager, drove her grandparents to Cedar Cove and plans to stay for the party, she is angry and flustered.  Oliver was the first boy Annie ever kissed. But, he ruined it by being a jerk afterwards. Annie never trusted him again. Oliver is the last person, next to Lenny, she ever wanted to see again. To make matters much worse, Kent and Julie are bickering non stop. If this wasn't enough to keep Jo busy, she gets a very disturbing phone call explaining that the helicopter Paul was in, has been found, but one of the bodies is missing. Could there be the slightest hope that Paul survived the crash? With her trusty companion, Rover, Jo deals with Mark's up and down personality, the dread of finding out Paul is without a doubt gone, and with her odd assortment of guest. The story of Mary and George is the most emotional, of course. Mary doesn't really have a definite prognosis, so we can only hope she is able to fight the disease and beat it. But, for the time being a very big part of her life that she had to make peace with is accomplished with the help of George. Once that is done, Mary must decide what her future will hold with or without George. Oliver is a little bit awkward with Annie. Cocky one minute, sweet the next, but clueless and hopeless the next. He's loved Annie since they were teenagers, but she can't get past the memory of Oliver as a teen ,unable to handle his feelings for Annie. But, as they spent more time together, the less off putting Oliver becomes. But the anniversary couple looks like they be headed for trouble if something doesn't happen soon. This story was cute, sweet, and had one the funniest moments in the book, thanks to something Kent says. Mark is an enigma. We don't know why he is the way he is, but I have a feeling we will find out more about Mark in the future. In the meantime, Mark has found a friend in Jo Marie and she has found one in him, which is a great start. I haven't read much women's fiction until about a year ago. I always thought of it was too emotional, sappy, and I HATE tearjerkers.  But, I have discovered that isn't always the case. Debbie Macomber is one of the very best in this genre.  Yes, there are emotional, real life issues in the story, but there was also a lot of humor, and the story always ends on a positive note. I can handle that.  I don't hand out five star ratings too often, but this one had me involved from the beginning. I read several books at once, usually, and I just kept coming back to this one to see what would happen next. You can't go wrong with this one. A+ Thanks to the publisher and Netgalley for the DRC of this book.
<a href="http://www.goodreads.com/review/list/5210022-julie">View all my reviews</a>
Posted by gpangel at 8:15 AM