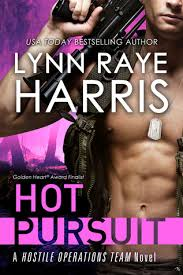 My rating: 4 of 5
Hot Pursuit by Lynn Raye Harris is a July 2013 release and is published by Victory publishing. I received a DRC of this book from the author/publisher and Netgalley in exchange for an honest review. Evie and Matt were best friends as children. But, as teens, Evie and Matt 'hooked up' and things were never the same between them again. With her reputation is ruins, Evie leaves the small Louisiana town of Rochambeau to become a chef. She eventually runs her won restaurant until her partner's connection with the mob is discovered and all of Evie's assets were seized. Now with her tail between her legs, she returns home and begins work in her mother's beauty salon. Matt is a member of HOT or Hostile Operations Team. His last mission cost two of Matt's men their lives and now Matt blames himself and his military career may be over. Home for his sister's wedding, Matt needs a haircut and saunters into the salon. He isn't sure what Evie's response to him is going to be, but he's not surprised when she is less than friendly towards him. But, they run into each other again and this time guns are blazing. Matt's instincts kick in and he steps in to save Evie. Then Evie discovers her younger sister has not returned home after a date. When she goes to her mother's she finds her mother in terrible shape and her ex-partner is dead. There is no sign of her sister, Sarah. Matt and Evie have to figure out what the kidnappers want and get it to them to save Sarah. They just don't know what they are looking for. In the meantime, things heat up between Evie and Matt. Although they care about each other it looks as if the two of them may not be able to work out their issues. But, before they can even get to that point they will have their hands full trying to get Sarah back and stay alive. This is a fast paced romantic suspense novel. The characters are easy to relate to and feel a connection with. Matt has had an up and down childhood and his family is a little dysfunctional. His team is really his family and his job means everything to him. Evie is trying to put her life back together and start all over from square one. I think many people can relate to that predicament. We see both these characters learn what is important to them and they find out just what they are made of. There is lot of action and hot romance. Matt, in my opinion, is a nice mix of Alpha and Beta and Evie is a strong woman that never gives up. Lovers of romance, action, and mystery suspense will enjoy this novel. Well written with equal part romance and suspense. This one gets an A.
<a href="http://www.goodreads.com/review/list/5210022-julie">View all my reviews</a>