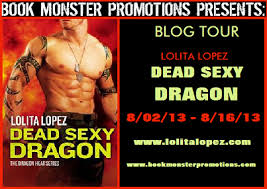 My rating: 3 of 5 stars
Dead Sexy Dragon by Lolita Lopez is published by Forever Romance, a division of Grand Central Publishing. This is an introduction to a new shape shifting series, obviously about dragons. Stig Wyvern is an immortal dragon shape shifter. Every three years he goes in heat. This requires him to lock himself up during the night until it passes. He is currently going through intense struggles with his raging libido, when his military buddy's sister, Cora, shows up out of the blue begging him to let her stay there. This is the last thing Stig needs. Cora is human and love and sexual relationships with humans is forbidden in Stig's clan. Cora is a temptation, not to mention the questions she may have about his time in the basement. But, Cora is in terrible trouble. Her brother was recently killed in an accident and he left Cora with his gambling debts. Cora was forced to do something illegal to keep from losing her bakery business. Now the business is up in smoke and Cora is being pursued by some very dangerous men. Stig has no choice but to let her stay with him. Cora was confused by Stig's reaction to her showing up at his home. He had told her when Hector died, if she ever needed him, he would be there. But, he wasn't happy about her being there. Once Cora settles in her room, determined to get a good night's sleep, she begins having very erotic dreams. Cora has always loved Stig. She held on to the hope that maybe some day they would get together. Being in his home has only made her want him more. When the truth begin to slowly come out, Cora is stunned. Not only that, the inevitable takes place and Cora comes away with some rather unusual side effects. What Cora doesn't know is that Stig has enemies, and she may have very well become a pawn in their war. While this novella was an enjoyable escape and very sexy, there wasn't anything here that hasn't been done before, really. But, it's hard sometimes to judge a new series by such a short introduction. The series does show promise, however. I will read the next book in the series to see where it leads. Overall a quick, light hearted, sexy, fantasy/paranormal romance that I will give a C+.
<a href="http://www.goodreads.com/review/list/5210022-julie">View all my reviews</a>