CLAWS OF THE CAT BY SUSAN SPANN 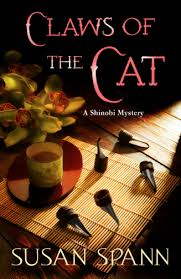 My rating: 4 of 5 stars
Claws of the Cat by Susan Spann is a Minotaur Press publication - a division of St. Martin's Press. This book was published in July 2013. Hiro, a ninja, working undercover to protect a Jesuit Priest finds himself in middle of a big mess, when a Samurai is murdered in the Sakura Teahouse, a young woman that recently became a convert of Father Mateo, is accused of the crime. Father Mateo is convinced she is innocent. The Samurai's son is convinced she is guilty and gives Hiro and Father Mateo two days to prove her innocence or he will kill the priest. So, with the clock ticking, Hiro becomes enmeshed in politics, family honor and secrets, and an odd love triangle. The owner of the teagarden is determined to protect the reputation of her business and is not helping with the investigation, and the accused continues to harbor secrets, possibly in an attempt to protect someone else. This is a very complex mystery. It was unique due to the Japanese location and customs. The attitudes regarding religion and women in the Japanese culture added additional complexity to the mystery. It was really very fascinating and engrossing. Hiro is an enigma. He's a man with a dark past, and although not really thrilled about this assignment, he and the priest forge a rather odd friendship. This book would appeal to any mystery lover. There was no graphic violence or language and only some mild mention of sexual content. Overall this was gets an A. Thanks to the publisher and Netgalley for the DRC.
<a href="http://www.goodreads.com/review/list/5210022-julie">View all my reviews</a>