ALL THE WAY HOME BY WENDY CORSI STAUB 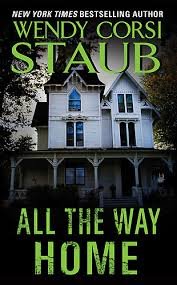 My rating: 4 of 5 stars
All the Way Home by Wendy Corsi Staub was originally published is 2007. It has recently been reissued in digital format. When Rory was child her older sister, Carleen,  disappeared. In short order, her best friend also disappeared as well as several other girls in their town. Then Rory's father passed away, leaving her mentally ill mother behind. Rory couldn't handle it and left to become an artist. Her brother Kevin took care of her younger sister, Molly, and their mother for years. Now, Kevin and his girlfriend want to take a European vacation. So, Rory comes home for awhile. When she arrives she finds her mother's mental health is far worse than she imagined. On top of that her younger sister is resentful of Rory for staying away so long and is going through the early teen years. Molly does a great deal of babysitting for the young couple next door, Michelle and Lou and their two year old son, Ozzie. Michelle and Lou live in the house where Rory's best friend, Emily lived until she disappeared. Now Michelle, who is pregnant with her second child, and alone in the house much of the time, believes she hears noises coming from Ozzie's room and Rory thinks she can smell Carleen's signature perfume from time to time. When Molly's best friend, Rebecca, disappears on the anniversary of Carleen's disappearance, the town gets nervous and the media zooms in. This brings in a true crime author that may hold a secret to Carleen's activities right before she vanished. This is one of those books that left me in the limbo between a three and a four star rating. So, really, I would have given it a 3.5 if I could have. The Gothic ambience is right up my alley. Large old houses that may be haunted, mysterious and strange characters that may or may not be sinister, and a decade old unsolved case, plus dark family secrets that are finally revealed. Some parts of the book didn't work as well for me. The ending was a little over the top. A sort of been there, done that kind of thing.<br />I put this in the romantic suspense genre, but it's really more of a suspense novel without much romance. The last chapter hints at romance and that's about it as far at that goes. So, if you are looking hot romance, it's not in this book. But, if you want a fairly solid, pretty creepy at times, mystery, suspense novel, you will probably find this one enjoyable. Over all this one gets B/B-