A DOVE AT MIDNIGHT BY REXANNE BECNEL 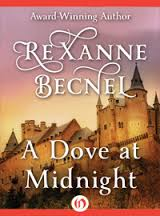 My rating: 4 of 5 stars
A Dove at Midnight by Rexanne Becnel was originally published in 1993. This is a DRC copy provided to me by Open Road Media and Netgalley for an honest review. This book is now available in digital format. Lady Joanna witnessed something truly terrible as a child. As soon as she is able , she moves to a convent and waits for the day she can say her vows and become a nun. When Joanna' s father and his wife and son died, Joanna becomes the sole heir. In medieval England, this places Joanna in the middle of a political tug of war. Rylan decides that Joanna must be informed of her father's death and he must bring her back to be married to a man he will choose for her.   This will prevent King  John from gaining control of Joanna' s kingdom. When Rylan informs Joanna that she must return home and marry, she literally laughs in his face. She has no intention of leaving the convent. After his best attempts at persuasion, Rylan kidnaps Joanna. Rylan has his hands full with Joanna. She is far from the plain, biddable , demure nun wannabe he expected. Beautiful and fiery, Joanna fights him every step of the way. But, when they are waylaid by the king' s men, Joanna finds herself in an even worse situation in the king' s court.  Joanna and her friend must marry men chosen for them based on political and monetary advantages. When Rylan arrives, things really get interesting. Rylan begins plotting to get Joanna away from the John's grasp. Due to circumstances beyond her control, Joanna finds herself having to face the horrible demons of her childhood. This was a great medieval romance. Joanna holds on to her need  to  stay unmarried and in control of her future  with all her might. Rylan can't understand why Joanna is so opposed to marriage. He suspects something sinister,but Joanna will not confide in  him. He is single minded about his task, believing Joanna will come around once she is wed. What he didn't count on was his attraction to her and her ability to out think him. Neither of them could imagine that one day they would work together for a common goal, and find true love in the bargain. This one gets an A.