UP IN FLAMES BY STARR AMBROSE 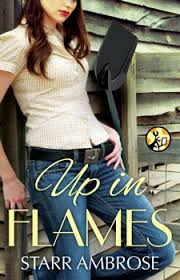 My rating: 3 of 5 stars
Up in Flames by Starr Ambrose is a Pocket Books publication. This book was released in July 2013. This is the third in the Barringer's Pass series. Sophie and Zane had an intense, but brief thing back when Sophie was seventeen. Their educational and class differences, not to mention Zane's rather down beat options for the future broke the two up. Sophie went on to earn an Phd. and Zane, even without an education, owns his own business. Now ten years later, Sophie and Zane meet again. Zane believes Sophie humiliated him and Sophie just had a broken heart. When Zane learns Sophie is unemployed he offers her a job. Not out of the goodness of his own heart, however. He has visions of Sophie with her highfalutin degree, out in  the hot sun lifting heavy rocks and taking heat from the crew for not being able to hold up her end. Sophie senses the challenge and shows up for work. But, things backfire on Zane in a big way when Sophie discovers a dead body buried on his property. Zane's family has been in big trouble with the law. So, people jump to conclusions and presume Zane is guilty of murder. Sophie doesn't think he's guilty and since the cops are looking for evidence against Zane, she decides to do a little detective work herself. The problem is she has gotten someone mighty upset. This a light romantic suspense novel. Sophie has an odd ball degree in Entomology, a bug doctor. Her area of expertise comes in handy eventually. She and Zane still have an attraction for each other, but it seems that circumstances are against them. Zane pretty much expects to be arrested for murder and is just waiting for them to come and get him. He doesn't do a lot to defend himself or protect himself. But, when it comes to Sophie he doesn't want his family's reputation to drag her down. The plot was certainly imaginative. I couldn't have been easy to write a story around exotic insects and spiders. The romance was alright. Zane was a good guy fighting against the town's prejudice, but he was also too quick to give in and give up. Sophie does give him a  little inspiration in that area in the long run. <br />Not a bad story all in all. I give this one C+
<a href="http://www.goodreads.com/review/list/5210022-julie">View all my reviews