THE STORM AND THE DARKNESS BY SARAH M. CRADIT 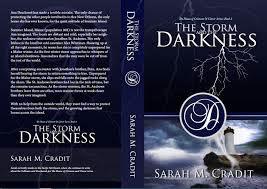 My rating: 4 of 5 stars
I received a copy of this book from the author for an honest review. This novel is part of series but can certainly be read as a stand alone.  Ana has fled her beloved New Orleans for Maine. The circumstances are vague in the beginning as why Ana needs to have this time to herself, but we know it was something huge. There is a home on Summer Island that has been in Deschanel family and she decided this was good place to go to put some distance between herself and what happened back home. Ana has always felt a little apart from other people and has a gift of healing that she keeps close to the vest. She has a really hard time connecting emotionally with other people and rather likes her own company most of the time. Other than a really close relationship with her cousin, Nicolas, and her father, Ana isn't close to anyone. She prepares for the winter in Maine, an experience she has never had, with the help of a friendly gentleman named Alex. The other folks on Summer Island are gossipy and stand offish at first, but the vet on the island is particularly rude. When circumstance arise that force Jon, the vet and his brother Finn, to take Ana into their home, things get really strange. When Ana doesn't contact her family for a few days, then weeks, Nicolas and his best friend, Oz try to get to island despite overwhelming odds. Nicholas just can't shake the feeling that something terrible has happened to Ana. The suspense builds and builds toward a shattering climax. In the aftermath, will Ana be able to come to terms with all these cataclysmic events and move forward from shocking revelations and build a life with another person for the first time in her life? The author does a wonderful  job of slowly revealing information at a pace that builds suspense. The atmosphere of winter in Maine gives the suspense another hard edge. Winters in Maine are infamous. Even those born and raised on Summer Island can be taken by surprise in dire situations. There was one point where the suspense became very taut. I was on the edge of my seat. As the author states, this novel has elements of paranormal, suspense, mystery and a bit of an unusual romance. In the end I felt like Ana will finally find some peace and will break a dangerous cycle in her life. This was very unique story. A great imagination and a peek into the darker side of human nature. This book would appeal to fans of many genres. Overall an A