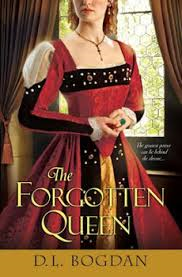 My rating: 4 of 5 stars
The Forgotten Queen by D.L. Bogdan is a Kensington Publication. The release for the book was January 2013. Thanks to the publisher and Netgalley for the digital copy of this book. The Forgotten Queen is a historical novel about Margaret Tudor, Henry the 8th's older sister. Margaret becomes a bride at the ripe old age of 12, married by proxy to King James of Scotland. At the age of thirteen she is on her way to Scotland to become the queen. Margaret adores James, but it's a little while before he views her as woman. They suffer many heartbreaks, until at the age of 23 Margaret finds herself a widow, betrayed by her own brother and left with virtually no trustworthy counsel and must take on the role of Queen Regent until her son comes of age. It's at this point Margaret goes off course and makes one crucial mistake after another. Her heartbreak, her loneliness, her role thrust on her although she never desired it, and the toll so many losses takes on her, makes her yet another queen during the Tudor period that suffers a tragic life. Although, we do see glimpses of her sense of entitlement at times, the duty that must always come first is a burden to Margaret. All she ever really wanted was to love and be loved and have a family. Her endless pursuit of this causes her more heartbreak than happiness. This is an interesting portrayal of this queen that we rarely hear spoken of or written about. Times were hard in those days and people were ruthless. I can't imagine being a woman in that time and having the duties and responsibilities Margaret had, but none of the respect and power the men had. Yes, she schemed and yes, she was unhappy no matter where she managed to land. She was restless, disillusioned, and worn out by loss. She was far from perfect and self absorbed  a great deal of the time. However, she wasn't prepared for the death of her first husband and didn't really know how to move forward at such a young age, especially since most of the time she was pregnant and giving birth. She was both successful and a failure at parenting. She was never successful at marriage or relationships with men, even with her brother Henry. We do get the feeling though that she did make it to a time in her life when things did slow down for her and she found some sort of peace with Harry and the role she played in her son's life. This was a very absorbing read. The Tudor period is just filled with schemes, power struggles, wars, great romances, and tragic deaths. f you like this period of history, you will really enjoy this book. A fascinating life story. Overall this one gets an A