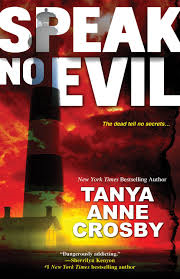 My rating: <a href="http://www.goodreads.com/review/show/582470046">4 of 5 stars
Speak No Evil by Tanya Anne Crosby is a Kensington publication. This was a March 2013 release. Thanks to the publisher and Netgalley for the digital copy of this book. Caroline returns home to South Carolina after her mother's death. She and her two sisters are stunned to discover their mother's will had a codicil that required them all to stay in S. Carolina for one year to receive their inheritance. Caroline will run the newspaper her mother owned. The newspaper is a "dying breed". There is stiff competition and Caroline will learn some hard lessons about ethics and journalism. Then there is Jack. Caroline and Jack almost got married ten years ago. Neither of them have really been able to move forward with other relationships. Now, that Caroline is having to see Jack face to face, old feelings have begun to surface. A young college student is found murdered and another child has been reported missing. Caroline thinks the two cases could be connected. Jack, a cop, isn't so sure. He and Caroline butt heads over how to report on the case, while at the same time they grapple with the feelings they have for each other. Caroline's two sisters also have issues they are dealing with. Their mother was a driven, career oriented woman, that had also suffered greatly when her only son disappeared. The girls had each other to cling to, but over the years they grew apart. Now each girl must learn how to deal with their mother's death, and the new lives they want to start for themselves. This was a really good romantic suspense novel. I love the idea of coming home after an absence and reconnecting with family and friends, and in this case the second chance at romance. Caroline's heart is in the right place, but like all of us, she makes some regrettable decisions. How she dealt with her mother's death was poignant. She had feelings of walking in her shadow, but also discovered her mother's sentimental feelings. I could also relate to Caroline's having to deal with a new job and trying to put her own personal stamp on things, while trying to appease long term employees. The romance was also done perfectly. Initially, Caroline remembers the hurt Jack caused her, but gradually she begins to  put those feelings to rest. Things don't go smoothly for the couple though. I liked Jack and felt for him too. He had a job to do and did the best he could, using his experience. The only thing I didn't like was how hard Jack could be on himself. Hopefully, if we get to bump into Caroline and Jack in the future, Jack will have regained some of his confidence. There was a good plot, a nice balance between mystery, romance, and family issues. Overall a solid A.