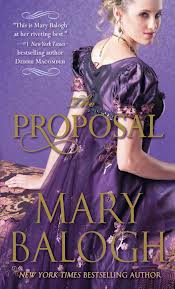 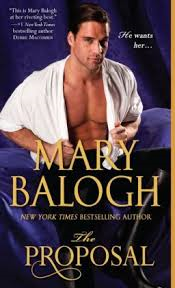 My rating: "http://www.goodreads.com/review/show/644131584">4 of 5 stars
First of all I would like to thank the publisher and Library Thing early review program for the beautiful paperback of this re-released Mary Balogh regency period romance. This version has a new cover and inside cover page. This is the first book in the Survivor's Club series. Gwen is a widow and living in relative peace and contentment. She enjoys her extended family and friends and doesn't wish to marry again. When an old friend writes and begs her to visit, Gwen feels empathy for the woman and agrees to stay for a month long visit. But, when she arrives at Vera's she finds her friend bitter and impossible to be around. After a nasty row, Gwen takes a walk along the beach, but the rocks are difficult to move around. She sprains her ankle badly and is unable to walk back to Vera's. Then suddenly a very large, menacing looking man appears and offers her assistance. Hugo has returned to Penderris Hall for his annual retreat with the other members of "The Survivor's Club". He has a great deal on his mind. His father's death a year ago deeply wounded him. He promised to provide an heir and so he feels the time has come to marry. He is also concerned for his sister who should be introduced to young men now and found a favorable match. Hugo is also still dealing with the aftermath of the war and the psychological issues he suffered. He came home a hero and was given a title although he was of the middle classes. When he sees Gwen take a fall on the rocks, he hopes she will be able to recover without his assistance. But, she is obviously unable to walk so he must come to her aid. This meeting sparks an instant attraction. Gwen is unable to return to Vera's under doctors orders and must stay in Penderris Hall until she is able to walk again. Hugo is resentful at first of her presence. He and his friends need this time to discuss their issues and draw strength from each other, but Hugo is distracted by Gwen. He is also uncomfortable around aristocrats and upper classes. So, although the two confess an attraction to each other, Hugo insist their class differences would make a marriage impossible. For the first time is a long while Gwen feels lonely. She feels her life is passing her by. Hugo has only made that feeling worse. She knows they can't marry, but Gwen's brief encounter with Hugo has made her reconsider marriage. Even though Gwen has returned home, she has not seen the last of Hugo. Mary Balogh's regency romances are always a pleasure. Hugo was morose and stern, but his blunt comments were also hilarious. He didn't mince words, which was refreshing. This man had been through hell during the war and would always carry guilt. But, Gwen also carried a great deal of guilt. He husband was ill and she had blamed herself for his death. Gwen and Hugo worked together to help each other overcome the guilt. So, this was a mature and emotional story . We were dealing with very adult issues and while there was humor there was also a sweet story of friendship as well as a bit of saucy lust. A great combination. Mary Balogh has written numerous regency romances and I love the way that she sticks to the authenticity of the period. The classes, the ton, the war, the language and dress of the time and manners are all befitting of this era of time. Her stories always have substance as well. This proves that a great story can be told with sensuality and romance without throwing in language and modern terminology that does not belong in a  historical romance. Overall this one gets an A.