THE COUNTERFEIT PROPOSAL/ THE NOTORIOUS RAKE BY MARY BOLOGH 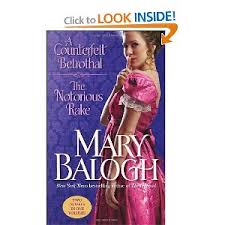 My rating: 5 of 5 stars
Thanks to Librarything and the publishers for the early review copy of this book. This is a re-issue of two of Mary Balogh's best loved novels, together in one volume. The first novel is The Counterfeit Betrothal. This book was originally released in 1992, I believe. This is an ageless and timeless novel. Lady Sophia loudly and proudly proclaims to a group of her closest friends that she will never, under any circumstances, marry. When pressed about this by her friends, she gives them the example of her own parents failed marriage. This conversation leads the group to concoct a plan that would bring Lady Sophia's parents together for the first time in fourteen years. What is the plan? Lady Sophia and her childhood tormentor, Lord Francis Sutton, a man with  a wild reputation, will pretend to be madly in love and on the verge of a betrothal. Olivia and Marc separated fourteen years ago after a betrayal on Marc's part that drove a wedge between them that could not be overcome. Eventually, they decided on a marriage in name only. Now their daughter is about to make the same mistake they made, by getting married too young. So, the parents agree to meet with their daughter together to take measure of the situation. This is two love stories in one. The light, fun and silly young couple and the more mature couple dealing with pain and heartbreak. Will Sophia's plan work? A classic regency romance. The young couple are getting themselves deeper and deeper into the pretend relationship until they begin to feel trapped into actually going through with a wedding. In the meantime, Olivia and Marc find they are still attracted to each other and are still in love, but after fourteen years they do not know if they can ever come together again. I LOVE this story! It's sweet, emotional and funny at times. It's regency romance at it's best. The second story is "The Notorious Rake". In this novel we meet Lady Mornington again. She plays a role in the first novel, but we never really get to know her. Mary is mourning the loss of her close friendship with Marc. She is lonely. After accepting an invitation to a social event, she finds herself caught out in a storm with the most notorious rake there ever was, Lord Edmond Waite. As they seek shelter, Mary is overcome with her fear of storms and Lord Waite is only too happy to offer comfort.<br />After the storm clears and they are back in their own homes, Mary hopes that will be the end of it, but Lord Waite experienced something with Mary he had never felt before. He is determined to win her over. Mary on the other hand longs not to be someone's mistress, but to have a stable, respectable marriage, and maybe even start a family. So, she begins a courtship with a Viscount. But, when she is placed in a weeklong birthday celebration with Lord Waite, she learns some terrible truths about Lord Waite's past that has her thinking of him in a new way. This is another wonderful regency period romance of a mature nature. The terrible tragedy that haunts Lord Waite is a sad and emotional story that will tug at the heart strings. Will Mary be able to help him put the past behind him and look to the future with hope and promise? Mary Balogh is the queen of regency! No one does it better. A+ all the way!