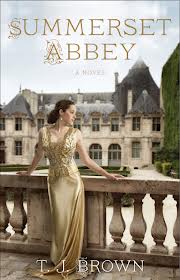 My rating: 3 of 5 stars
Summerset Abbey is the first of series by T.J. Brown. This is a Gallery Books publication. This book was released in January of 2013. Set in 1913 London, three girls were raised by an eccentric father. Rowena the oldest, Victoria, and their best friend, Prudence. When their father dies the terms of his will upend the girls lives. They lose their father, their home and along the way, each other. The girl's uncle is given control of the their money until they are either married or turn a certain age. They have no choice but to move out of the home they love and live with their aunt and uncle in Summerset Abbey. Rowena takes on the burden of looking out for her frail, sickly sister and arranges for Prudence to live with them for Victoria's sake. The catch is that Prudence must live as a ladies maid and not as a guest. This opens up a chasm between the girls. Victoria is physically weak, but has the nerve to stand up to her relatives against the rules of the society they hold so dear. Rowena, guilt ridden, grief stricken and completely unprepared for this turn of events, flounders a bit. She gives in to her relatives and even begins to forget the sisterly bond she has once shared with Prudence. Prudence learns there is a secret about her mother and her mother's life here at Summerset Abbey. She learns that her life up to this point was a sham. She was the daughter of a maid, not a member of the society that Ro and Vic were born into. When the girls discover the shocking truth behind Prudence's heritage, things may never be the same again. Compared to Downton Abbey, the TV show, this novel highlights the differences between the classes. When the girls find themselves having to adhere to these rules, the true nature of their personalities comes out. We are supposed to feel for Rowena and see the good she has in her. She doesn't agree with the rules her relatives live by, but neither does she do a great deal to change things. Her manta is to repeatedly apologize for the situation they all find themselves in, and not much more. Victoria is the one I really like. While she battles her health, her spirit is strong. She is just as much of a victim as Prudence in some ways because her sister lacks the temerity to do the right thing. Prudence learns the hardest lessons of all. She is the main focus of this novel as her story is at the heart of everything. She struggles with letting go of the life she had become accustomed to and life she forced to live now. Prudence really gets the chance to live the life of "society" and the life of service. I had a hard time getting into the book at first, but the mystery of Prudence's heritage kept me engaged. This series has promise and I wanted to rate this one a bit higher, but I was a bit disappointed with the abrupt, spur of the moment decisions that are made at the end. I had hoped for more for these girls. But, there will be more books in this series and hopefully we will get an update on how things are going for Prudence. Overall, this one gets a B-