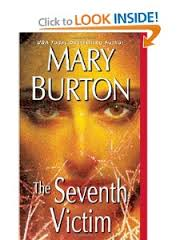 My rating: 4 of 5 stars
The Seventh Victim by Mary Burton is a 2013 Zebra/ Kensington publication. Seven years ago Lara Church was attacked and nearly strangled to death by the Seattle strangler. She doesn't remember anything about the attack, even after being harrassed unto death by Mike Raines, a dectective on the Seattle police force, and after seeing countless doctors. Lara goes on the run and finally has settled in Austin, Texas. Her grandmother has passed away and Lara has inherited her property. Taking a job at the local university as a photography teacher she also does her own peculiar photography of crime scenes. Now there have been several murders that mimic the Seattle strangler exactly. The case goes to James Beck, a Texas Ranger. It comes to his attention right away that Lara Church, the only survivor of the strangler now lives in Austin. James wants Lara to see a doctor in Austin to see if her memory can be unlocked. The two clash because Lara wants to be left alone, but James won't let it go. James comes to believe that the killer will eventually target Lara and she is the key to catching the killer. Added to the mix is Mike Raines who has retired from the Seattle police force and started his own security company. He is also in Austin to help James find the killer, even if James doesn't initially welcome his input. This is a dark serial killer mystery thriller. Lara's obsession with crime scenes, the creepy serial killer MO, the ever present tension of waiting for something bad to happen to Lara and maybe to other characters we come to care about. There is also the tension from the relationship between James and Lara. James comes on too strong, often forgetting that Lara is a victim ,not just a person that could help crack a case. Although she wants to help, she simply can't remember anything, which is just as frustrating to her as it is to the investigators. Eventually, James begins to respect Lara a great deal and the ice between them begins to melt. There are a lot of twist and turns in this one. The last quarter of the book is really, really tense. The romance part of the book is reserved for the proper time and place in the book and is not the  primary focus of the book. Overall this one gets an A. Thanks to the publisher and Netgalley for the ARC