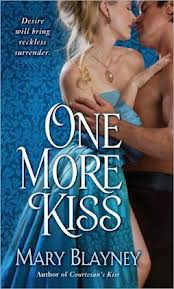 My rating: 4 of 5 stars
One more Kiss by Mary Blayney is a Bantam publication with a tentative release date of April 2013. This is the fifth in a series, but you wouldn't know it was part of a series. It could easily be read as a stand alone novel. Jess Pennistan is "gamer" and arch enemy of Lord Crenshaw. After losing some land to Crenshaw while gambling, Jess has shown up at a house party hosted by a Countess, a good friend to Mr. Brent- a man in "trade", but wealthy enough and connected enough to try and get his daughters, Beatrice and Cecilia, a season in London. The party was  given to introduce Beatrice and Cecilia to different elements of society and give them some "practice" at flirtation. All Jess and Viscount Bendabrook want is to spend their time gambling, hopefully giving Jess the chance to win back the land he lost to Crenshaw. Beatrice and Cecilia have been warned to steer clear of Jess due to his terrible reputation. But, Beatrice is instantly taken with him. Jess also finds himself curious about Beatrice. The Brent sisters couldn't be more different. Beatrice is content to focus on education, art and hopefully a career instead of marriage. Cecilia is overly cautious, takes few risk, always does as she is told. She is known for her beauty, but nothing deeper than that. A season in London is much more important to Cecilia than it is to Beatrice. But, Beatrice is determined to see her sister's dreams come true. Beatrice is curious about Jess. The details of his fall from grace are unknown to her and she is determined to find out what scandals he was guilty of. Much to her surprise she finds that some people consider Jess a hero and a very honorable man. This makes Beatrice even more curious and more attracted to Jess. Meanwhile, Viscount Bendabrook is smitten by Cecilia and each works to prove to the other that they see past looks and are looking for something deeper in a person. The courtship between the Viscount and Cecilia provides some laugh out loud moments.,When I first saw the reviews for this one on Goodreads, I noticed there were some rather lukewarm reactions. No, there is nothing groundbreaking here. It is a typical regency period historical romance. No, there isn't a lot of explicit sex scenes. In fact, on the steam level it would only rate a two. The story was drawn out a bit longer that it should have and could have been cut down just a bit. Having said that, I did enjoy the story. Beatrice being a free spirited girl, was open minded about Jess and didn't form a negative opinion about him until she had the facts straight. Her sister, Cecilia is more delicate, and more innocent and less confident, but learned to take risk and prove she had brains as well as beauty. The character of Jess and his efforts to help someone at a great cost to his personal reputation, shows us he is not the rogue that even he has convinced himself that he is. I was also impressed with the author's staying true to the ethics and language and behavior of the time period. The book is well written, the story is sweet, and has a HEA for all. Overall a B. Thanks to the publishers and Edelweiss for the  ARC.