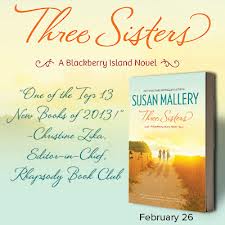 Three Sisters by Susan Mallery is women's fiction/romance novel. This book is scheduled for release in early February and is published by Harlequin Mira.<br /><br />Three Sisters - the beautiful, Queen Anne style Victorian homes on Blackberry Island house, three completely different women and families at various stages in their lives. As the story opens all three residents are going through very rough periods of their lives.<br /><br />Andi had her life all mapped out. She lived in Seattle, had her career as a doctor and was about to marry Matt, the man she had spent the last decade with. Then Matt jilts her at the alter in front of 300 friends and family, and leaves her to deal with the aftermath. Andi also has to deal with her over achieving family when she suddenly leaves Seattle and buys a two hundred year old Victorian home that will have be completely renovated. But, Andi needs a fresh start. She wants to be a pediatrician and the island is in desperate need of one. So, Andi is determined to put men, sex, and romance out of her life forever and focus on helping kids. But, her sexy contractor,Wade, keeps distracting her from her "no more men" policy.<br /><br />The home on Andi's right was beautifully restored, with a perfect garden and landscape. Deanna and Colin live here with their five daughters. On the outside it looks like the perfect home and the perfect family. But, looks can be deceiving. Deanna believes her husband has been having an affair. When she confronts him, Colin takes the opportunity to let loose on Deanna about how unhappy he is with their marriage and how miserable she makes their children. How dare he? Deanna works hard to be the perfect mother. No regular TV- PBS only, no sugar, no seconds at dinner, etc.  Her rules are strangling her marriage and her children. Suddenly, Deanna feels like the outsider in her own home. Not to mention the fact that she has put off most of people on the island and has no friends or family to turn to for a shoulder to cry on.<br /><br />The house on on the left is also restored. Zeke and Boston have lived on the island all their lives. It was love at first sight for Zeke and Boston. They had been in love and very happy until a horribly sad tragedy upended their lives. Now the once strong and happy home is crumbling rapidly and it looks like it may implode permanently unless they can both find a way to cope with, then accept what has happened and move forward with their lives.<br /><br />This is an emotional story of how three women are coping with difficult and overwhelming situations. It is also a story of how these women forge a friendship despite their differences and first impressions. Some of the women bonded from the start, but other got off to a very rocky start. As they began to confide in each other, they learned to lean on each other and support each other through the good moments and the bad.<br />The subject matter was hard to deal with at times, especially with one of the stories being so very, very sad. In each of the stories the men were often a bit too selfish or not supportive enough. One obviously could have helped more by addressing the need for medical intervention, but these men were also suffering as well and were doing what they could to cope, even if it wasn't always the right way to cope. None of these characters were without their flaws, which is of course what makes the story real and believable.<br />The only weak story line, for me personally, was with Andi's guy, Wade. Wade had some reason to feel like he did, but I thought he took it way too far and wouldn't listen to Andi when I thought she was being quite honest about everything. He was too cautious and too sensitive about their differences.<br />Even though the situations these women faced were monumental, in the end we are filled with hope and encouragement. We feel the power of love and friendship and community and come away with the knowledge that these three couples are on their way to the next chapter of their lives with the worst behind them and bright future in the front of them.<br />Adult subject matter, sexual situations/content, mild language. Overall this one gets an A.<br />I got this book from Edelweiss for an honest review. <br />
<br/><br/>
<a href="http://www.goodreads.com/review/list/5210022-julie">View all my reviews</a>
Posted by gpangel at 9:59 AM